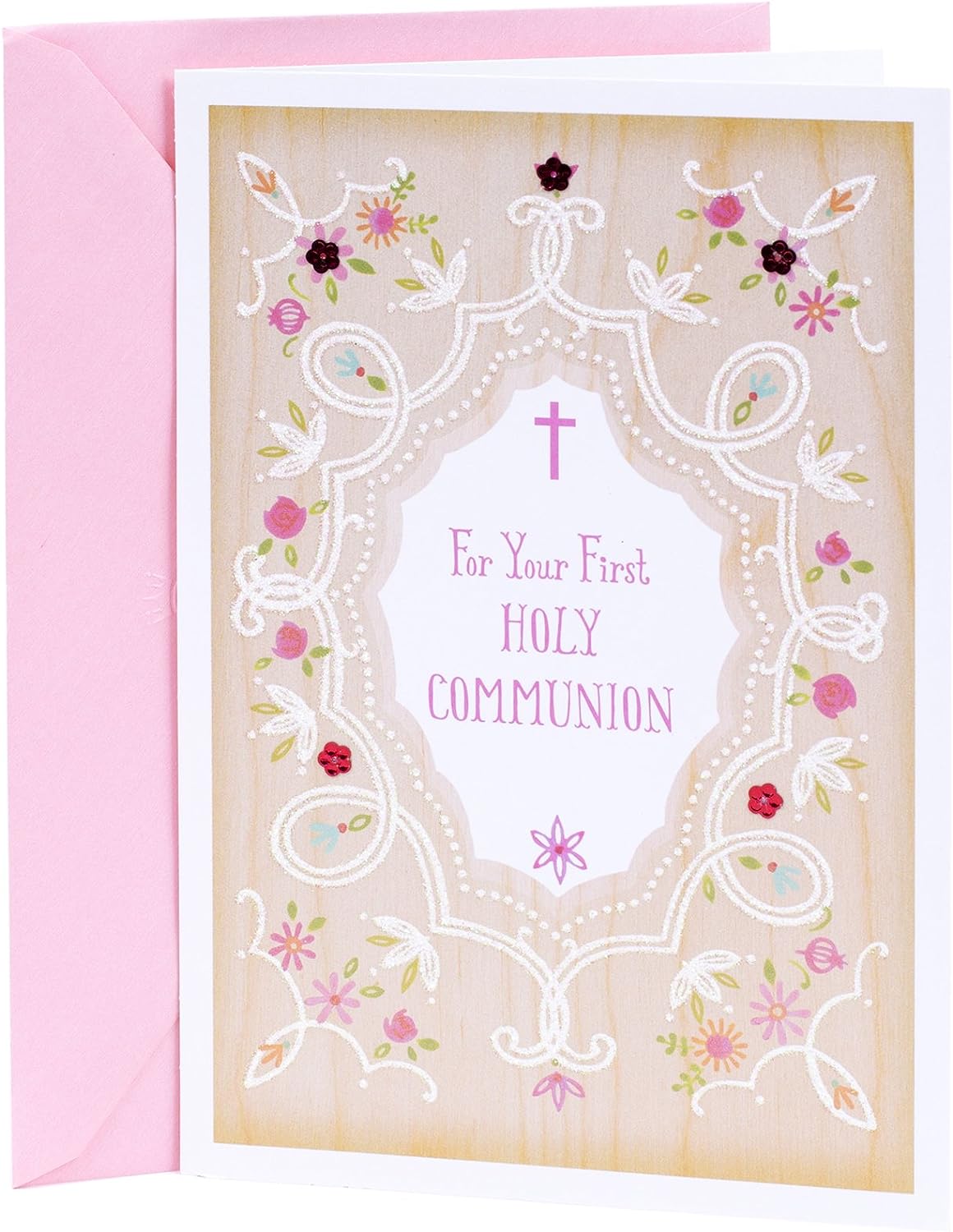 Color:You're Wished Every Grace and Blessing

Send blessings to a friend or family member on her First Communion with a beautiful card made especially for the occasion. With a glitter-accented design and message of faith, it's the perfect way for a godmother, godfather, aunt, uncle, parent, or grandparent to celebrate this blessed sacrament. A keepsake worthy memento for one of the most sacred days of your loved one's life. The Hallmark brand is widely recognized as the very best for greeting cards, gift wrap, and more. For more than 100 years, Hallmark has been helping its customers make everyday moments more beautiful and celebrations more joyful.

DaySpring Cards was born in a small commercial print shop in Covina, California, in 1971. The company was founded by four Christian men - Dean Kerns, Don Leetch, Russ Flint, and Roy Lessin. These men started DaySpring with a common vision, to make Christ known through the printed message.

The company remained in California for eight years, and experienced great growth and acceptance within the Christian publishing industry. In 1979, through direction from the Lord, DaySpring moved to the city of Siloam Springs in northwest Arkansas. The company purchased land and built its plant in a beautiful country setting near the Illinois River. Only 30 employees made the move to Arkansas to begin this new adventure.

Menu
No products in the cart.
£0.00 Cart
Maaji Women's Standard Brazilian Gospel Reversible Bikini Bottom
AMBA & BGA Accreditation Forum 2021
AMBA & BGA‘s Accreditation Forum is specifically designed to help prepare accreditation professionals at Business Schools that are applying for AMBA and/or BGA accreditation or re-accreditation.
Learn more about the forum
AMBA & BGA Excellence Awards and Gala Dinner 2022
The AMBA & BGA Excellence Awards and Gala Dinner celebrates the quality and achievements of post-graduate business education at the forefront of leadership excellence, recognising the talents and contributions made by AMBA-accredited Business Schools, their students, and graduates.
Learn more about the Gala Dinner
AMBA & BGA Business School Leaders Summit 2022
Bringing together Business School decision makers in both a physical and a virtual setting to discuss trends, issues, challenges and opportunities, which will set the agenda for business education strategy and action.
Find out more
About us
Learn how AMBA has been spearheading excellence and trailblazing innovation.
Find out more
AMBA Accreditation
AMBA accreditation denotes the highest standard of achievement in postgraduate business education.
Primal Elements Detoxifying Sea Salt Soak, Bubbling Aromatherapy
AMBITION
Launched in May 2016, AMBA’s print and online magazine AMBITION is a fantastic resource for AMBA stakeholders and was awarded the Best Online Magazine at the MemCom Membership Excellence Awards, 2017.
Find out more
The AMBITION Podcast
Delve between the columns of AMBA's award winning magazine with The AMBITION Podcast. This series is essential listening for Business School leaders, students & graduates and aspiring leaders.
Find out more
Covid-19 Relief Fund
Find out how you can help AMBA & BGA raise much needed-funds for five incredible charities supporting communities affected by Covid-19.
Support our Covid-19 fundraiser
Previous
Next

Find out about our accreditation
services for post-graduate Business
School programmes, as well as accessing our research for Business School leaders.

Access the lifelong learning content we provide to MBA students and graduates and register wealth of benefits and thought leadership.

AMBA offers a variety of initiatives to help you reach your key audiences and prospects in the business education arena.

Thinking of doing an MBA?

Discover the right MBA course for you, as well as a raft of information about the application process and benefits of completing an MBA.

Read some key articles from our award-winning magazine AMBITION, focusing on business trends and lifelong learning

The AMBA Excellence Awards celebrate the quality and achievements of business education and leadership excellence, recognising the talents and contributions made by Business Schools, MBA students, and graduates.

Want to get in touch?

We use cookies to ensure that we give you the best experience on our website. If you continue to use this site we will assume that you are happy with it.OkPrivacy policy